Arguably the greatest championship course in the United States, The Straits at Whistling Straits has hosted the 2004, 2010 and 2015 PGA Championships and the 2007 U.S. Senior Open, and it is the future site of the 2020 Ryder Cup.

The Straits Course is the flagship course at Whistling Straits. As of 2012, it had a length of 7,790 yards (7,123 m) and a par of 72. It hosted the 2004 PGA Championship won by Vijay Singh in a playoff over Chris DiMarco and Justin Leonard, the 2007 U.S. Senior Open won by Brad Bryant, and the 2010 PGA Championship won by Martin Kaymer in a playoff over Bubba Watson. The course hosted the PGA Championship for a third time in 2015 with Jason Day winning three shots better than Jordan Spieth. In 2020 the Ryder Cup will be held on the course.

The Straits Course replicates the ancient seaside links courses of the United Kingdom and Ireland. Nestled along a two-mile (3 km) stretch of Lake Michigan, the course has eight holes hugging the lake, a flock of Scottish Blackface sheep, elevation changes of approximately 80 feet (24 m), and three stone bridges. It has vast rolling greens, deep pot bunkers, grass-topped dunes and winds that sweep in off the lake. Being a coastal links-style course, there are few large trees or woods on the course. The course is open and exposed to the wind and elements.

Before the course was built, the property was an abandoned airfield called Camp Haven (1949–1959),[2] with a stream running through the middle. Kohler Company CEO Herbert Kohler hired Dye to be the course architect. During construction, the original landscape of the Straits Course was covered with about 800,000 cubic yards (610,000 m3) of dirt and sand.[3]

Hiroshi Iwata holds the course record for the Straits Course with a 63 in the second round of the 2015 PGA Championship. 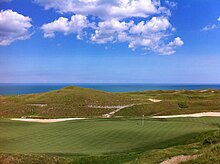 The second course at Whistling Straits is the Irish Course, an inland grass-and-dune layout. It is a par-72 course that features 7,201 yards (6,585 m) of golf from the longest tees, with a course rating of 75.6 and a slope rating of 146. Also designed by Pete Dye, it opened for play in 2000.The course record of 67 was shot by Mike Frechette in 2007 and then matched by Garret Buckley at the 2014 Whistling Straits Intercollegiate.

View of Lake Michigan from the Irish Course